This is for all you science nerds out there. Henry Reich of MinutePhysics on YouTube is brilliant at explaining all manner of things physics-like, and this is too good not share. So, let us all think deep thoughts about the inherent imperfection of our instrument, and make a note that as pianists, our favorite number should really be the twelfth root of two.

With so much to reflect upon after the MTNA conference, I think my best bet is just to go backwards! In this case, it is kind of like starting a meal with dessert…The Steinway Factory Tour!

I had been looking forward to this part of the trip with barely contained excitement, and after some delayed-subway drama that resulted in me attempting to run 6 blocks and just barely making the bus, the day did not disappoint. The early morning group was small, and our “guide” was John Marek, Manager in Charge of Fabrication. Saying that this was an “inside look” barely begins to describe it.  John spent over 90 minutes taking us through the factory, in and amongst the workers going about their daily production. I came away with a head full of facts and statistics, but even more so, a sense of awe at the time, care, detail and craftsmanship that goes into the creation of a Steinway piano. The factory currently produces about 5 grands and 1 upright a day. Not unlike a baby, the process of building a single piano takes about 9 months.  Here are a few snapshots!

Steinway has very strict specifications for the soundboard: the grain of the wood should run at 90 degrees, with a 15 degree deviation acceptable in each direction. There must also be no fewer than 10 tree rings per inch. About 50% of the wood for soundboards is rejected because it does not meet those standards. (Did I mention all the statistics?)

In light of all the economic doom and gloom of the last several years, it made me feel rather warm and fuzzy to see the very blue-collar inner workings of the Steinway company (an American company through and through– this was mentioned many times during the tour!) Most of the materials are sourced within the US (wood mostly from the Northwest, wool for the felts from New Hampshire sheep, strings made by a company in Kentucky) and many of the highly skilled workers come from several generations of Steinway builders (and are members of United Piano Workers Local 102).

So, I highly recommend that all piano geeks (and manufacturing geeks, at that…) take a bit of a detour on your next New York trip and head over to Astoria, across the Queensborough Bridge. The Steinway factory does tours on Tuesday mornings, but you must schedule in advance by contacting info@steinway.com

If New York is not on your upcoming itinerary, the marvels of the Steinway factory can be experienced through the 2007 documentary Note by Note: The Making of Steinway L1037. I saw the movie back when it came out, and the DVD was one of the several souvenirs I came away with from New York. I’m excited to finally own a copy so that I can lend it to all my piano students!

Joy, over at Color in My Piano, started a great conversation about pianos and teaching spaces. I have enjoyed seeing photos of instruments and studios on many of my favorite blogs. So, I thought I would join in the show-and-tell!
Here is a shot of my “studio” (aka: one side of my living room in a small San Francisco apartment): 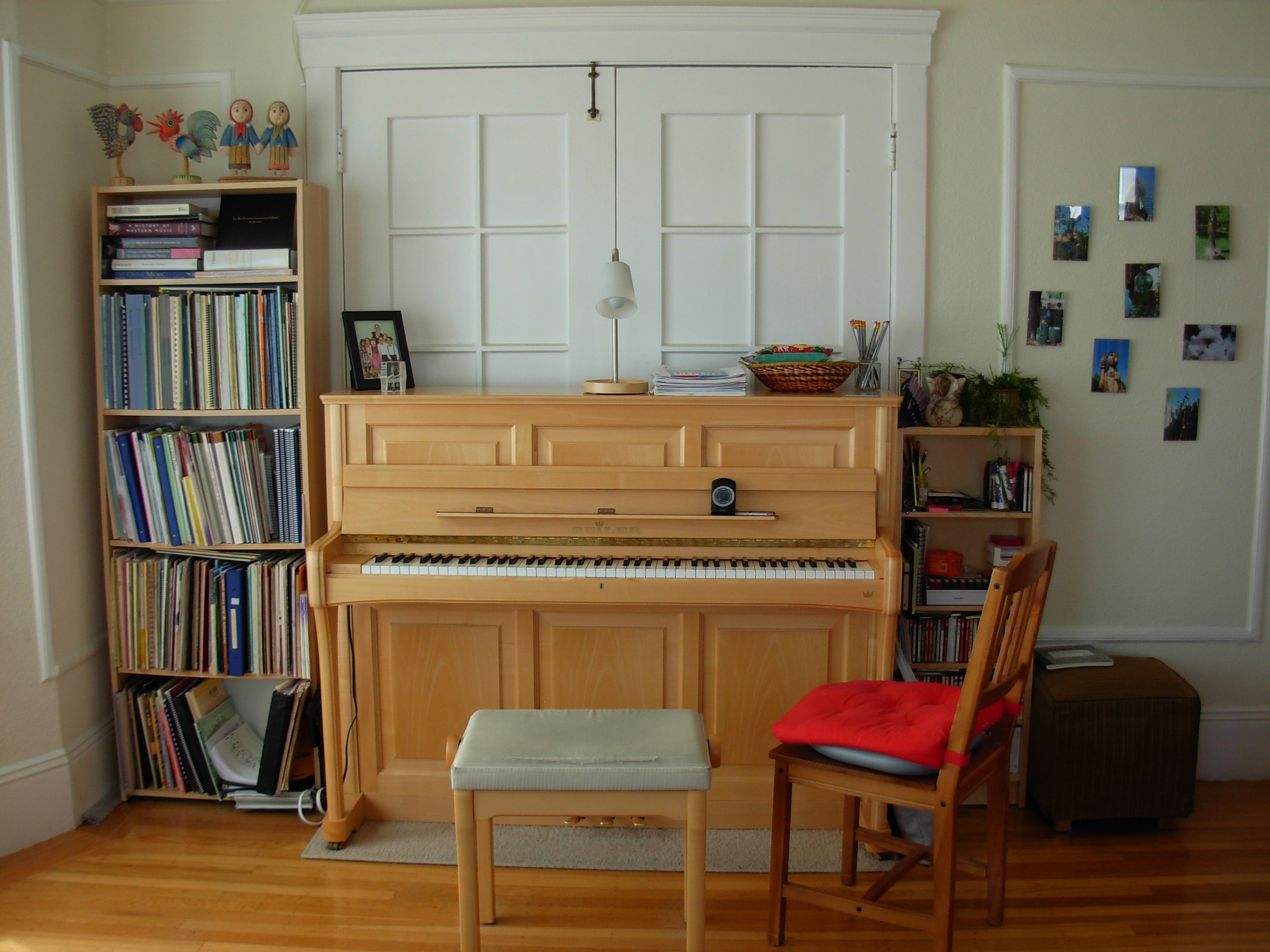 My piano is a Seiler upright, which was a gift from my parents when I graduated from Conservatory. We found it at the San Francisco Opera’s annual piano sale. Each year, the opera sells pianos that were used in practice rooms at the Opera House. I don’t know if many other organizations do such a thing, but here in San Francisco it is a great opportunity to find a gently used high quality instrument.

While I love my cozy corner, I dream of someday having a space devoted completely to teaching. That bookshelf you see on the left is overflowing with music (another bookshelf full of orchestral scores is on the other side of the room), and the little shelf on the right no longer holds all of my piano CDs which I like to have on hand to loan out to students. My current space also doesn’t allow for any sort of group lessons or studio class—something I would really like to offer in the future.
The good news is that in the meantime, I am blessed with a beautiful piano and very patient neighbors!